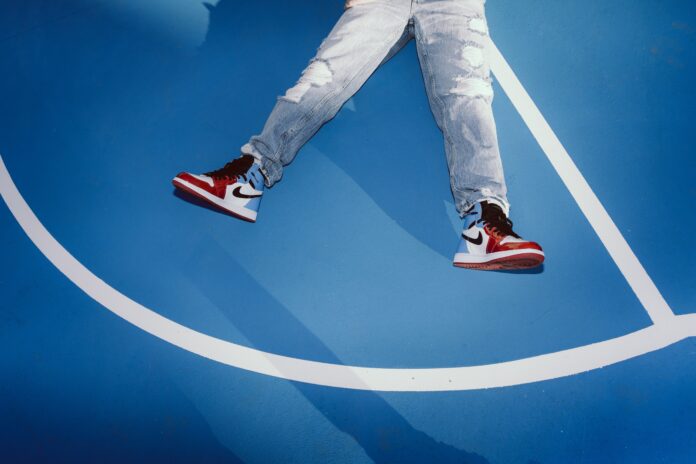 The G.O.A.T, or Michael Jordan, is the main man, and Air Jordans are
his signature footwear. Perhaps only his sneaker is more recognizable
than the man himself. The Air Jordan brand is ubiquitous, seamlessly
bridging the gap between streetwear and athletic footwear on the
court and in music videos. From the original Air Jordan I from 1985 to
the Air Jordan XXXVI from 2019, the sneaker has seen various
versions.

The original pair of Air Jordan sneakers. created by Peter Moore,
Bruce Kilgore, and Tinker Hatfield. It was first made available in 1984
in a red and black hue that the NBA subsequently decided to outlaw.
Later, they unveiled a permitted red and white hue. In its first year,
Nike made more than $100 million in sales of the Air Jordan I.

Bruce Kilgore was the designer of the 1986 release of the Air Jordan
II. It was created using a fake lizard skin and was crafted in Italy. It
lacked the Nike swoosh, unlike the original Air Jordan.

The first Jordan to be created by Tinker Hatfield was the Air Jordan III,
which was launched in 1988. Michael Jordan was about to depart Nike
once his contract ended, but his design essentially prevented that
from happening. Additionally, it was the first pair of shoes to have the
iconic Jumpman insignia.

The first shoe to be sold worldwide was the Tinker Hatfield-created Air
Jordan IV, which was introduced in 1989. In Cleveland, Michael
Jordan also wore them for “the shot,” which won Game 5 and the
series for Chicago in the 1989 Playoffs. Fans will never forget this
moment.

The 1990 Air Jordan V was created by Tinker Hatfield. It was the first
to have lace locks and transparent rubber soles. The shark-tooth
the shaped midsole was modeled after fighter jets from World War II.

1992 saw the introduction of Tinker Hatfield’s Air Jordan VII. In place
of the number 23, Nike issued a special Olympic colorway with the
number 9. In the Olympics, Jordan wore jersey number 9.

1993 saw the introduction of Tinker Hatfield’s Air Jordan VIII. Michael
was named MVP of the Finals and won his third straight NBA
Championship. It would end up being Jordan’s final pair of shoes
before his first retirement.

Tinker Hatfield was the designer of the Air Jordan IX, which was
introduced in the fall of 1993. The baseball cleats that Michael Jordan
wore when playing baseball during his first retirement served as the
model inspiration for this sneaker.

Tinker Hatfield was the designer of the Air Jordan X, which debuted in
the autumn of 1994. The sole of the shoe included a list of Michael
Jordan’s accomplishments as an homage. Nobody anticipated that
Jordan would declare “I’m back” and continue to establish his legacy
months later.

The 1995 Air Jordan XI was created by Tinker Hatfield. One of the
coolest Air Jordan models ever created could be this one. From toe to
heel, the shoe was covered in patent leather, and the top mesh was
ballistic.

Tinker Hatfield created the 1996 Air Jordan XII, which was made
public. One of the most durable Air Jordans, this shoe has a faux-
lizard skin and a carbon fiber shank plate. The “flu” game, in which
Michael Jordan scored 38 points to win game 5, is the best-
a known instance of this sneaker.

Tinker Hatfield created the 1997 model Air Jordan XIII. The panther
served as the inspiration for this shoe, which has a hologram at the
ankle that, when illuminated, seems to be a panther’s eye. The sole
has a panther-paw appearance.

The Air Jordan XIV was created by Tinker Hatfield and Mark Smith
and launched in 1998. The Ferrari 550 M served as the model for this
sneaker. Famously associated with Michael Jordan’s last shot as a

Chicago Bull to win his final NBA Championship, this shoe was worn
at the 1998 Finals.

Tinker Hatfield was the designer of the 1999 release of the Air Jordan
XV. The X-15 fighter plane served as the model for this sneaker.

Since the Air Jordan III, Tinker Hatfield had not created a shoe until
the Air Jordan XVI, which was launched in 2001. Wilson Smith created
it, and it included a detachable leather wrap that protected the shoe.

Wilson Smith created the 2002 edition of the Air Jordan XVII. The
shoes came with a CD and were packed in a silver casing. It had a
TPU heel stabilizer, full-length shank plate, and lace shroud. Jordan
wore this sneaker in his first season following his comeback from
retirement.

Released in 2003, the Air Jordan XVIII was created by Tate Kuerbis.
Italian dress shoes and race automobiles served as the inspiration for
this shoe. The sneaker, which came wrapped with a towel, was the
last one Michael Jordan would wear while competing in the NBA with
the Washington Wizards.

Air Jordan XIX and Beyond

After Michael Jordan retired, Jordan Brand continued to create new
Air Jordan shoes every year. However, none of them contained the

heritage or inspiration that made the Air Jordans Michael wore
throughout his playing career so great. Fortunately, Jordan Brand
keeps releasing throwback retro styles to offer fans a nostalgic
feeling.

How To Make The Most Out Of Your Alexandrite Jewelry