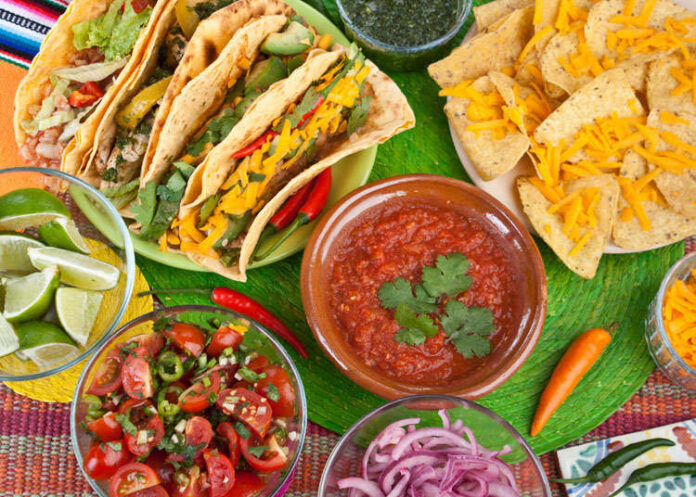 A lot of people, especially in the US, are fans of Mexican cuisine. Or at the very least, we’re fans of what we think are Mexican dishes. But the real truth is that many of the Mexican dishes that we Americans have enjoyed through the years weren’t really invented in Mexico at all. Some were even invented in the US, and not in Spain or some other Latin American country.

It’s true that there are real Mexican dishes out there. Some are so old that they originated way back during the time of the Mayans, Incas, and Aztecs. But others are American inventions, and were invented comparatively recently.

Here are some of the Mexican dishes that actually originated in the US:

A chimichanga (chimichangas is plural) is a fried burrito, and it comes with many different combinations of fillings and toppings. Usually, that means the sort of ingredients you’d normally associate with Mexican cuisine.

You might have some sort of Mexican meat, such as birria, barbacoa, carne asada, or carnitas. Some of the more hardcore sellers might insist on Mexican cheese, though many think the melty Tex-Mex queso is perfect. You can also put in some refried beans, black beans, and seasoned Mexican-style rice. Add some herbs (like Mexican oregano) and you really have something.

The thing is, many experts believe that chimichangas didn’t come from Mexico at all. Sure, there are those who insist that the chimichanga was brought into the US by Mexican migrants from the northern Mexican state of Sonora.

There are actually 2 other claims regarding the real origins of chimichangas, and both stories have the original birthplace as Arizona. One story says that Woody Johnson, who founded Macayo’s Mexican Kitchen in Arizona, accidentally dropped a burrito into their deep-fat fryer, and he discovered that it was quite good.

The other story also involves a burrito accidentally dropped into a deep fryer. But this time, it involves the El Charro restaurant in Tucson, and it happened in 1922. Supposedly, the founder of El Charro started to exclaim a profanity, but she changed what she was about to say because there were kids around. Thus, the chimichangas were born.

This is one popular cocktail associated with Mexican dishes, but 2 competing stories both say that it’s a US invention. One story features a man named Pancho Morales, who lived in El Paso.

Morales claimed that he invented the drink back in 1942. A woman had come into the bar asking for a Magnolia, but he didn’t know how to make it. So, he invented this drink on the fly, and then told the woman that he thought she said she wanted a Margarita.

That’s a good story, though the other story isn’t as compelling. That other story simply claims that the margarita was the invention of a team of bartenders working at the LA bar The Tail O’ the Cock, maybe in 1939 or so.

Okay, let’s state up front that burritos are undoubtedly Mexican in origin. But like the chimichanga, the Mission burrito is a version that’s really American. In fact, it’s the version of the burrito that most people imagine when they see burritos in the restaurant menu. It’s a burrito that has a lot more fillings than the traditional burrito that the Mexicans invented.

According to some researchers, this Mission-style burrito was invented in 1961 at El Faro, which was in the Mission district of San Francisco. This explains the name of this particular burrito. The original burrito traditionally only featured beans and rice, but their version had a lot more ingredients inside. This actually resulted in the popularity of larger tortillas and larger burritos.

What’s a Mexican pizza? It’s that familiar flat piece of dough, but the toppings contain many essential Mexican ingredients. These might include Mexican meats, cheeses, and spices.

According to the stories though, the Mexican pizza started out in San Antonio, Texas, back in 1950s. And it’s not surprising that plenty of pizza-makers would experiment with Mexican ingredients though—after they started putting pineapple on pizza, everything’s possible.

But Mexican pizza is good, and it’s not just Taco Bell that makes them. If you’re ever in the UK, find an Amigos Mexican Food location there, and you’ll find plenty of Mexican pizzas along with more traditional variants.

According to the story, these workers were given cuts of meat that were unlike to sell for good prices. These include cuts of meat like the intestines, head, and the skirt steak that the Mexicans call the fajita. They marinated the meats in lime juice and then pounded the meats to make it more tender. They then cooked the meat over a fire, and served them after wrapping them in a flour tortilla.

Today, you can have many other meats inside, such as chicken or even other Mexican meats. But fajitas were born in the US, and that makes them US citizens—right?

How To Elevate a Boring Cup of Coffee

Reasons to try raising cane if you haven’t already