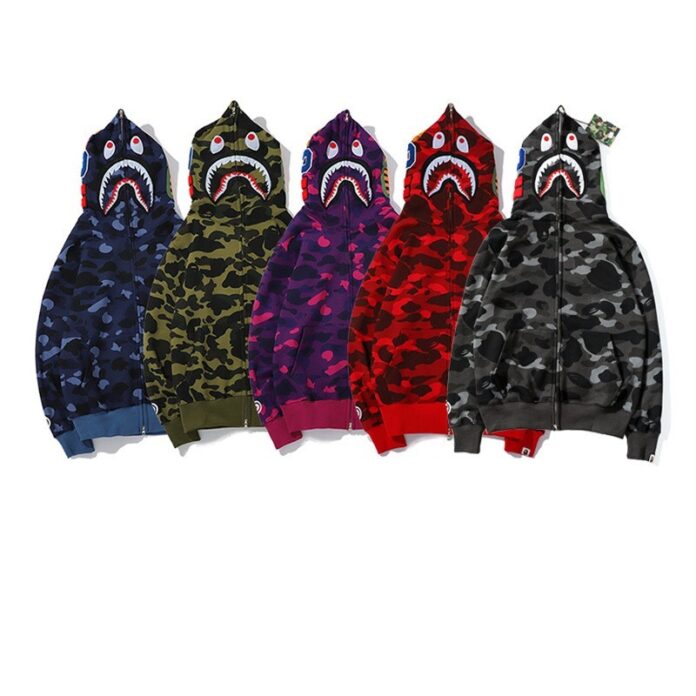 The complete guide to A Bathing Ape

The year is 2022, and streetwear is more significant than ever. This once-fringe movement is now considered mainstream and is all over the media. In the fashion industry, major players are more excited than ever – designer brands from Balenciaga to Burberry rely heavily on the culture.

And street stars such as Virgil Abloh are taking over the helm of well-known luxury brands. But if we go back to 1993, to a time before we were all entirely aboard the hype train and the moment when Japanese brand BAPE was getting its wheels under it, let’s take a step back in time.

Today, the brand is one of the most iconic names in streetwear. The brand is widely recognized for its shark motif Bape hoodie and iconic camo prints. Here is Everything you need to know about BAPE’s history and how it was able to gain a competitive advantage in the streetwear market by going from a small fish to a major shark.

The history of BAPE

BAPE was founded by one man, the legend that is Nigo, and with some help from a few of his friends. Like many of the most popular streetwear brands from Japan, the label was born out of the underground Harajuku scene. The elusive designer Sk8thing has NOWHERE’s newest project (AND ALL THE CLOTHES ON IT).

He opened with his cohort Jun Takahashi from Undercover and has since been working on designing his clothes. Launching the label on a shoestring budget (Nigo could only afford to produce around 50 T-shirts per week) led to the unintentional invention of two elements that have become the building blocks of today’s streetwear model – hype and scarcity.

After the acquisition by I.T. Ltd. and the departure of Nigo in 2010, BAPE has continued to cater more and more to its Chinese and Taiwanese audiences and has further transformed from an exclusive and experimental streetwear brand to something more akin to a high-end luxury flex piece.

BAPE collaborated with Coca-Cola in the fall of 2016, which highlighted that it is proving to be a highly successful marketing company even after the buyout. It has failed to reinvent and develop itself afterward.

Bathing Ape is one of the most recognizable streetwear brands in the world. Its importance and influence will be difficult to overstate. Yet, its current relevance as something new and fresh is very hard to ignore. After periods of extreme austerity and exclusivity, Nigo’s aggressive expansion into new markets was profitable in short intervals.

Still, they failed to put the foundation for consistent and sustainable growth over the long term. Slowly at first, then quickly and briefly describe both the accumulation and loss of his empire as he briefly describes.

As a result of Asian demand and the legacy it has created in the streetwear industry, it will continue to remain important for a long time to come.

This is a black and royal blue Bape Crew Varsity Jacket. It is 100% authentic and is a part of the official BAPE Jacket Collection. The BAPE Jacket is made with premium material of 80% cotton and 20% polyester, which provides a very high level of comfort.

If you wish to obtain the Bape Crew Varsity jacket, please select the BAPE Jacket Shop. In this shop, you will locate the best clothing items that will make your streetwear look complete.

Who was the first rapper to wear Bape?

Every hypebeast has this question on their mind. But in the same way as the question: “who is the first to make white on white Airforce 1’s?” We might never know the answer (although it was probably Jay-Z).

The wider streetwear community isn’t going to give up the crown lightly, with many referencing Pharrell or The Teriyaki Boyz as the ones who first brought Bape to the international spotlight.

We know that it wasn’t Lil Wayne who put Wayne on Bapes because Curren$y himself said that it was he who did it. Who was the first rapper to wear the Bape t-shirt? It turns out that Biggie was the first to wear it.

In a recent episode of Complex’s Sneaker Shopping, Soulja Boy, aka ‘Big Draco’, claimed that he was the first person to wear Bape sneakers.

It is explicitly stated that people in high school called the sneakers the fake Air Forces back. when they were considered ‘fake Air Force 1s’. I was the first rapper on Bape, said the multi-platinum rapper Soulja Boy. Perhaps in his world, he might be justified in believing that.

He did write a rap called “I got me some Bathing Apes”, which was featured in the 2007 hit single “Crank That (Soulja Boy). But let’s be honest, there’s always a particular pleasure associated with fact-checking Mr First to Do Everything, who claims to know Everything.

Do you wash BAPE inside out?

When I wash it inside out in cold water (I even use the wool program for cotton), I gently spin it in the machine (so it doesn’t be wet for days on end), and then I hang it up to dry.

Top 4 Ways to Wear Brown Hair with a Blonde Underlayer

Fabric Jewelry: Reasons And Types Of Fabric For Jewelry Making

Why Are Gift Cards A Better Present?