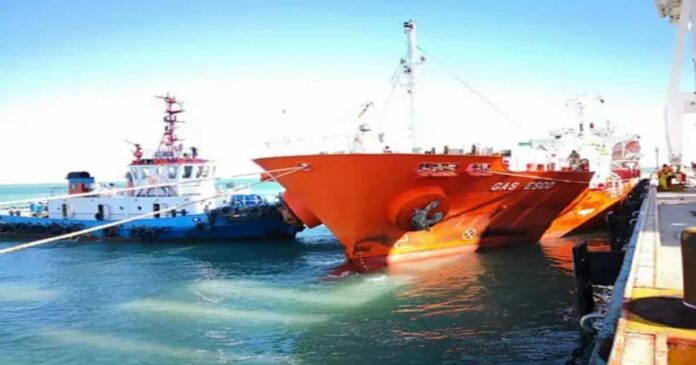 Gwadar fishermen stage a demonstration against granting fishing rights to Chinese trawls Gwadar: Hundreds of fishermen, political workers and civil society members staged a protest march against the federal government granting Chinese fishing rights in Gwadar through the issuance of licenses. The National Party and the Baluch Students Organization had called for a protest march and sit-in in front of the Gwadar Press Club against the government’s move.

Rally participants marched through the coastal city’s roads and later picketed. The Gwadar fishermen had abandoned their fishing grounds to build the Gwadar port. Haji Fida Hussain Dashti, Faiz Nagori, Manzour Qadir Bakhsh, Abdul Rahim Al-Sarabi, Muhammad Noor. The leader of the fishermen of Gwadar Khoda e Dad Waju spoke on the occasion. The government allow foreign fishing vessels to deprive the Gwadar fishermen of their livelihood. Their economic conditions improve once the port read. The speakers said but now, the federal government has granted licenses to Chinese fishing vessels.

They urged people to unite on this vital issue for the people of Gwadar. They alleged that the provincial fisheries minister and federal government officials. Its instead of supporting the local fishermen’s position. They were making statements in favour of the Chinese fishermen. They demanded that the government revoke the fishing licences of Chinese fishing vessels to protect the livelihood of local residents. Fishermen fear as China monitors Pakistan’s fisheries. A Chinese diplomatic announcement that China will expand the fishing industry in Gwadar spooks fishermen in Pakistan’s coastal cities. Which are already facing destitution due to declining catches.

Fishermen in the city of Gwadar on the Arabian Sea fear China’s growing interest in the Pakistani fishing sector. “If it means their fishing vessels will eat more of our fish. Then we don’t want any investment or help from the Chinese,” said Haji Khordad Waju. One of the community leaders in the area that is being developed as a trading hub. In the middle of the China-Pakistan Economic Corridor (CPEC). The scores of fishermen along Pakistan’s 990-kilometre. It coastline crushe by the devastating effects of unregulated. The foreign and domestic fishing vessels that have “inflicted mass fish annihilation”.

A senior Chinese diplomat shared that country’s plans to expand. The local fishing industry in an interview with a Pakistani newspaper. “You [Pakistan] have abundant resources when it comes to fisheries… Chinese investors are very interested in investing in Pakistan’s fisheries sector. Consul General Li Beijian. He talked about bigger boats and modern fishing equipment for Gwadar fishermen. Said there was an urgent need to build processing plants. “Local fishermen need to increase their fishing capacity to help export seafood.

The statement deeply alarmed fishermen in Sindh and Baluchistan provinces. Where a fishing community is struggling to survive due to the rapid depletion of fish stocks. China’s demand seems insatiable. With the growing demand for seafood at home, China has one of the largest seafood industries in the world. Britain’s Overseas Development Institute (ODI) estimates the size of China’s deep-sea fishing fleet vessels, ahead of any other country. International studies have linked the destructive fishing practices of Chinese fishing. Vessels to the depletion of fish stocks in many countries.

A recent study from Stockholm University predicts. China will likely need up to 18 million tones of additional seafood. To meet projected domestic consumption. A demand it will meet in part by expanding fishing operations in distant waters. Residents of the coastal city. They would end the month-long protest after the government agreed to most of their demands. Federal and provincial ministers have also announced development projects worth billions. They improve access to water, electricity, health, education and facilitation for fishermen.

“We decided to cancel our protest,” said Maulana Hidayat Rahman, who led the protest, after negotiations with the government. The ministers have fully assured that they will abide by our demands. Baluchistan’s Minister of Planning and Development Mir Zahoor Ahmad Blued also described. The negotiations as “successful”, which should help address the complaints of local residents. Gwadar protest Located in Pakistan. Baluchistan province along the Arabian Sea, Gwadar is a major seaport. The potential to become a regional trading hub under the China-Pakistan Economic Corridor.

“A women and children, joined the peaceful protest under the slogan “Give rights to Gwadar”. They called for an end to the illegal trawling that harms the livelihoods of local fishermen. The easing of security controls and the facilitation of trade in the city. The government officials including Federal Planning and Development.

Prime Minister Imran Khan earlier ordered federal. Provincial authorities to crack down on those involved in illegal trawling. Development Package for Baluchistan Minister Asad Omar said that, the people of Gwadar will soon. Witness the impact of new development projects in health, education, water, electricity, information technology and other sectors. The Pakistani government has announced 199 projects for the development of southern Baluchistan. 16 new dams built in the southern regions. That will add 0.5 million acres of water. The government also approve. the construction of a desalination plant. With a capacity of 1.2 million gallons per day for Gwadar. To provide fresh water to the people of Gwadar city.