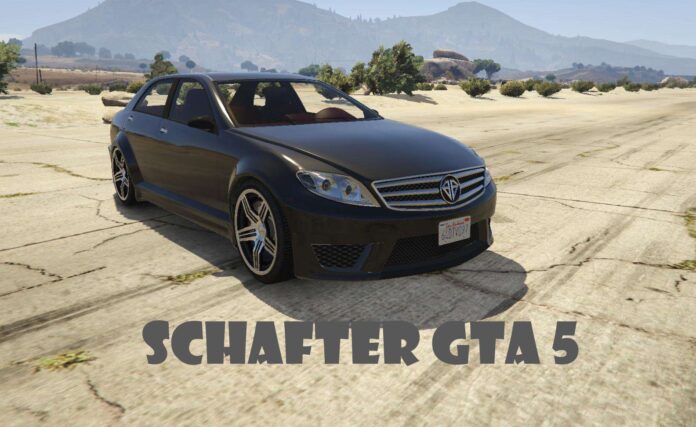 The Schafter is based on the Mercedes-Benz S-Class, with minor influences from the Mercedes-Benz CL-Class. It features a sleek yet understated design, complete with a large front grille and elongated headlights. The car’s wheelbase appears to be stretched compared to the S-Class, giving it a more regal appearance. The Schafter is available in both standard and armored variants.

Performance of Schafter In GTA 5

The Schafter is fast and agile for a Luxury Sedan, thanks to its charged V8 engine. However, its durability is less impressive. The car’s heavyweight means that it suffers from poor acceleration when attempting to pull a sharp turn at high speed and can quickly lose control or even spin out of control if misused. The performance of both variants is identical.

The Armored variant features similar performance upgrades and has extra resistance against bullets and crashes. For unknown reasons, it does have about 50% more power than its standard counterpart.

This version can reliably take at least four direct front hits before catching fire or exploding, making it an excellent vehicle to invest in after completing the Story Mode mission, The Multi-Target Assassination as Franklin Clinton. However, it remains incredibly vulnerable to rear attacks due to the lack of any external reinforcement.

In GTA Online, two variations of the Schafter can be found; one is a standard model, and the other is an armored variant, both of which may spawn with any of the car’s three colors. One notable difference between the stock models and their armored counterparts is that only the latter features rear fenders-mounted strobe lights and front grille mounted spotlights.

There are no other performance differences between these variants; as such, both models will explode if exposed to one direct rocket (from a Rocket Launcher or Sniper Rifle), although it takes four missiles to set off an explosion on either version in Grand Theft Auto V. The player can quickly tell which version it is by looking for small stickers on each of the doors, a black sticker with the Benefactor logo on the armored variant and a smaller, silver Benefactor logo on the standard model.

The Schafter is a common sight on the streets of Los Santos but is more commonly found in affluent areas such as Rockford Hills, Vinewood, and Del Perro. The Armored variant can occasionally be found parked in front of the Vincente Towers Apartment complex in West Vinewood or driving around the affluent neighborhoods of Rockford Hills and Mulholland. It can also be seen driving around the Business District during the daytime.

In GTA Online, both variants can occasionally drive around Downtown Los Santos and suburbs like Strawberry. The armored variant is slightly more common than the standard model.

The Schafter is one of the essential vehicle in-game. Due to its luxury status, it’s commonly used as a target for the player to take down. This can be done during any mission or random event where two gangs are fighting or when you need to steal an armored vehicle.

You can earn money by simply marking up Armored Vehicles and selling them at Los Santos Customs. Landing on the roof of many different businesses will also net you instant cash if your vehicle is hurt badly enough. As GTA Online updates, players will find that their upgrades may not be enough to handle some of the later missions (due to stronger enemies). So well-upgraded Schafters are very helpful during these missions due to their speed, power, and armor.

HOW TO GET THE SCHAFTER

The Schafter can be bought for $65,000 or found and taken from the street. The Schafter can be kept as a vehicle in your properties or garages. Los Santos Customs offers customization options. In a vehicle workshop located inside one of your owned homes, you can also modify it.

The Schafter is the most expensive land vehicle in GTA Online, costing $575,000 for both models. Contrary to popular belief, the taillights of the Schafter are not recycled from the Emperor sedan they are part of a Benefactor Glendale. A similar tail light set-up is also present on an earlier model of the Glendale intended for use in Grand Theft Auto V’s Beta (see Gallery). However, on older models, only one taillight will work when active brake lights are enabled.

Although this minor glitch isn’t present with other GTA V cars, it makes all brake lights more realistic. The Schafter’s armored variant has a bulletproof windscreen, clearly seen when Michael de Santa performs his windshield-punching animation after activating the corresponding option in his advanced interaction menu. This is again an animation glitch that isn’t present on other vehicles.

Read more:A Detailed Overview About How To Make Pumpkin Pie In Minecraft?

The Schafter is a luxury 4-door sedan found in Grand Theft Auto V and Online. It is based on the Mercedes-Benz S600.

What are the differences between the standard and armored variants?

The standard variant is less armored than the armored variant, which has increased armor and bulletproof windows.

Where to find a Schafter?

The Schafter can be found driving around affluent areas of Los Santos and parking in specific locations.

What’s the importance of the Schafter?

The Schafter is one of the essential vehicles in-game due to its speed, power, and durability. It’s perfect for almost any situation.

Is the Schafter the most expensive car in-game?

Yes, the Schafter is the most expensive land vehicle in GTA Online, costing $575,000 for both models.

What are some of Schafter’s features?

The Schafter has a luxurious interior and a powerful engine. It’s also fast and agile, making it perfect for any situation. The armored variant is more heavily armored and has bulletproof windows.

Is it true that Schafter’s taillights are recycled from an earlier model?

Indeed, the taillights on some (but not all) Schafter’s in GTA 5 and Online have reused assets from a car intended for use in GTA V’s beta.